Shortly before World War I, a Turk visited Fr. Ieronymos’ humble hermitage. The Turk told the elder that his master, a judge, had sent him to invite the elder to his house.

The elder became a little worried. He was not accustomed to receiving invitations to “social receptions” and his mind began to suspect that he might experience some evil or temptation. However, he prayed to God and followed the Turkish servant.

On their arrival at the judge’s large home, the judge himself welcomed him – with much warmth, as a matter of fact. They sat on a great divan and the judge began the conversation:

“Efendi papa, I am a Turk, a Moslem. From the salary I receive, I keep whatever is necessary for my family’s support, and the rest I spend on alms. I help widows, orphans, the poor; I provide dowries for impoverished young women so that they can get married, I help the sick. I keep the fasts with exactness, I pray and, in general, I try to live a life consistent with my faith. Also, when I sit in judgment, I strive to be just, and never take a person’s position into account, no matter how great he is. What do you say? Are all these things that I do sufficient for me to gain that Paradise that you Christians talk about? 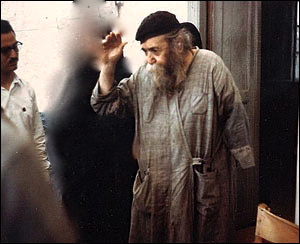 “Do you have servants?”

“I have servants also.”

“Which of the two carry out your orders better — your children or your servants?”

“Assuredly, my servants, because my children — with the familiarity that they have toward me — often disobey me and do whatever they wish, whereas my servants always do whatever I tell them.”

“Tell me, I pray thee, efendi, when you die, who will inherit your wealth — your servants, who executed your wishes faithfully, or your children who disobey you?”

“Well, my children, of course. Only they have rights of inheritance, whereas the servants do not.”

“Well then, efendi, what you do is good, but the only thing your good works can do is place you in the category of those that are good servants. If, however, you desire to inherit Paradise, the Kingdom of the Heavens, then you have to become a son. And that can be accomplished only through Baptism*.”

The Turkish judge was greatly impressed by the elder’s parable. They spoke for a long time after this, and at the end he asked the elder to catechize him and baptize him. And thus, after a little while, the good judge was baptized and became a Christian.

*Of course, the Elder Ieronymos is certainly referring to Orthodox Baptism. He was no ecumenist!

See: St. Nectarios Press Bookstore: “Father Ieronymos the Cappadocia, the renowned Elder of the isle of Aegina in Greece, was an exceedingly compassionate healer of souls, a clairvoyant Father-confessor who saw the secret thoughts hidden in the heart, and a may of unceasing prayer who attained to the heights of the vision of God. Those who knew him exclaimed that they had met another Saint Isaac the Syrian. He reposed in 1966.  Along with many personal accounts, the book contains miracles worked by the Elder, numerous illustrations and a service composed in his honor.”

1 thought on “The Good Turkish Judge”